Would your pupils benefit from a bursary from the Joan Dickson Chamber Music  Fund?
Would you like to provide local chamber music opportunities for your pupils?

What has the Joan Dickson Chamber Music Fund achieved?

The Joan Dickson Chamber Music Fund is generously supported by the following sponsors:

The Joan Dickson Chamber Music Fund was established in 1997 to honour the memory of Joan Dickson, a founder member of ESTA (UK) and Vice-Chair to Sir Yehudi Menuhin.

For Joan Dickson, chamber music is the essence of all that is greatest in music and she saw it as infinitely beneficial in the development of young players. The Joan Dickson Fund, established in her memory, is designed to foster the playing of chamber music among the young. Any practical needs can be catered for, such as the setting up of small libraries of music, the hiring of rooms for rehearsing, organising visiting chamber music coaches and helping ensembles to attend courses. 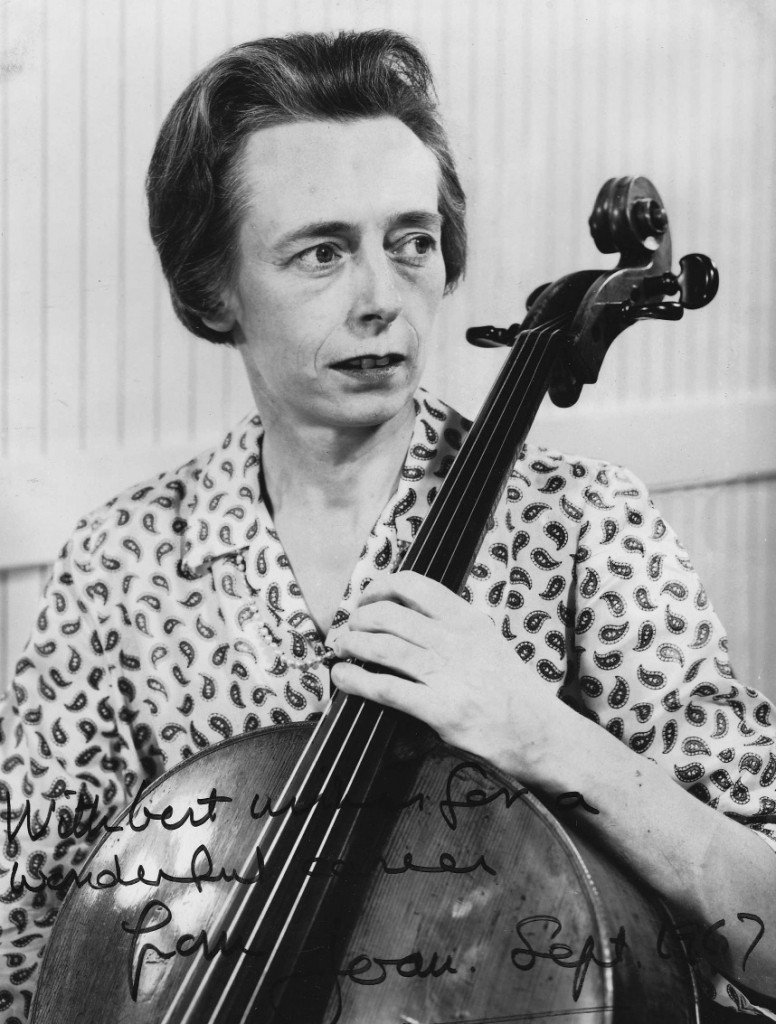 Joan Dickson was born into a very musical Edinburgh family, and throughout her childhood friends and family members gathered regularly to enjoy playing together, fostering her lifelong love of chamber music. She became internationally known as a cellist, an inspired teacher and a chamber musician of distinction: she was a founder member of the Edinburgh Quartet and later joined the Scottish Trio.

Her pioneering involvement with ESTA stemmed from a deep concern for fostering the highest possible standards in string teaching at all levels. At ESTA courses and similar events she preferred to call her classes “workshops” rather than “master classes”, reflecting her unpretentious attitude to her role as teacher and facilitator. Her influence was widespread and embraced conservatoire, private practice and peripatetic class teaching both at home and abroad.

The sound musical logic of her interpretations was conveyed through her wonderful use of the bow as well as her mastery of the fingerboard. Having been persuaded that cellists at large would like to use her material in their practice, she collected a series of her exercises together in a book ‘Freedom of the Fingerboard’. Originally published by ESTA (UK) and now by Spartan Press the book continues to support ESTA financially and is always in demand.

Joan taught for many years at both the Royal College of Music and the Royal Scottish Academy of Music & Drama (now the Royal Conservatoire of Scotland) and her presence and dedication to teaching greatly enhanced their status. At the RCM her students received a balance of one-to-one and group lessons, as she believed they could learn so much from each other’s lessons. She was endlessly supportive of her pupils and colleagues and was passionate about introducing young players to the world of ensemble playing at whatever level and wherever situated. She always had a number of younger pupils under her care as she believed that the most vital lessons are those taught in the first year. In 1965 she was awarded the Worshipful Company of Musicians’ Medal for Services to Chamber Music.

She undertook any activity with great energy and commitment, expressing the competitive side of her character on the golf course, in croquet and table tennis, and becoming an enthusiastic computer user when they were still in an early stage of development.

Joan combined a serious, honest, no-nonsense approach to life with a youthful energy and a surprisingly girlish sense of fun, all of which made her a natural choice for the teaching faculty of ESTA summer schools and conferences.

It is a mark of the respect in which she was held by the chamber music world that the first of the series of fund raising concerts which raised the initial £26,000 from which JDCMF bursaries are awarded was given by the Endellion Quartet.

Please fully read these criteria before applying for a bursary:

Project grants from the Fund may be awarded in a variety of circumstances with special emphasis on instigating and supporting chamber music opportunities for students still of school age in communities that are geographically isolated or, for any other reason, lacking in such opportunities. Any practical needs can be catered for, such as the setting up of small music libraries, the hiring of rooms for rehearsing and organising visits from chamber music coaches.

Teachers applying for funding for a project bursary should submit the following:

Project bursaries are awarded on a first come, first served basis and are for a maximum of £350. Teachers must submit a report, which may be published on the website or in ARCO or JESTA magazines, within one month of the end of the course.

The maximum bursary given is £350 unless there are exceptional circumstances. Bursaries are awarded by the ESTA Bursary Committee on a first come, first served basis. Each year a specified amount of funding is made available. For this reason, it is advisable to apply early.

Within one month of completion of the course the bursaree must submit a report about the course and what s/he gained from it. ESTA (UK) reserves the right to publish this report or extracts from it.

In addition, if the bursary is sponsored by one of our corporate donors, the bursarees must write two ‘thank you’ posts for ESTA’s social media platform, one before and one after the course.

Parents/Guardians of pupils should complete an application form or email us for further details.

For further information on this bursary fund please email us at bursary@estastrings.org.uk