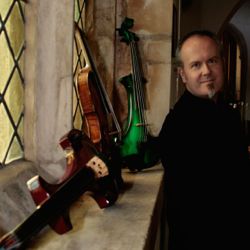 Steve Bingham studied violin with Emmanuel Hurwitz, Sidney Griller and the Amadeus Quartet at the Royal Academy of Music from 1981 to 1985, where he won prizes for orchestral leading and string quartet playing. In 1985 he formed the Bingham String Quartet, an ensemble which has become one of the foremost in the UK, with an enviable reputation for both classical and contemporary repertoire. The Quartet has recorded numerous CDs and has worked for radio and television both in the UK and as far afield as Australia.

Steve has appeared as guest leader with many orchestras including the BBC Scottish Symphony Orchestra, the Scottish Chamber Orchestra, English National Ballet and English Sinfonia.

Steve is also a conductor of some repute and is currently principal conductor of Ely Sinfonia, the City of Peterborough Symphony Orchestra and the Ad Hoc Sinfonia.

In the field of world music Steve has collaborated with several notable musicians including guitarist Jason Carter and players such as Sanju Vishnu Sahai (tabla), Baluji Shivastrav (sitar) and Abdullah Ibrahim (piano). Steve also plays live with No-Man, the progressive art-rock duo of Tim Bowness and Steven Wilson. In recent years Steve is much in demand providing violin backing for many different artists and styles, from folk singer-songwriter ballads to prog rock!

Steve is internationally renowned for his solo violin recitals, where he mixes acoustic pieces with live-looped electric violin arrangements in his own unique way. Steve has released four solo albums, “Duplicity”, “Ascension”, “Third” and “The Persistence Of Vision”, alongside many single tracks. Steve’s interests include ornithology, photography and Celtic knotwork.

This site uses cookies: Find out more.
Go to Top